Customs Advice – An outline of “the origin of goods”

The EU is a customs union; therefore, customs law is a responsibility of the Community. Community customs law is, in turn, based upon the law of the World Trade Organization (WTO). Economic operators and institutions must follow the interpretation guidelines of the EU Commission, DG Taxation and Customs Union, the rulings of the Court of Justice of the European Union. The European Community is based upon a customs union that covers the trade of all goods and that establishes:

- the prohibition of customs duties on imports and exports and charges of equivalent effect between Member States (the so-called internal dimension);
- the adoption of a common customs tariff for the relations between Members States and Third Countries (the so-called external dimension);
– Common Customs Tariff duties shall be fixed by the Council acting by a qualified majority on a proposal from the Commission (art. 28 Treaty EC).

The Harmonised System is a convention whose purpose is to facilitate international trade by establishing a single “language” that identifies the products via a code and a description. This convention has been enforced by 200 Countries.

The existence of preferential duties, applied by virtue of commercial agreements, of agreements in favour of the Developing Countries, and of commercial policy measures, such as anti-dumping duties, results in a considerable variability of the duties that may be applied to imported goods, depending on the Country of origin of the imported goods. For this reason, the Commission has set up the Integrated Tariff of the European Union, named TARIC, that indicates all duties that may be applied to a product.

ORIGIN OF THE GOODS

The concept of the origin of the goods is quite important, if you want to understand and manage the customs aspects correctly.
Below are two kinds of origin, which, despite having a small difference in their names, are substantially different from one another.

non-preferential origin: it protects the consumer by providing information about the actual place of production of the product or the place where the product underwent the last substantial processing or working (art. 24 EC Reg. 2913/92), regardless of the possible percentages of foreign goods that were used during the production. Please note that the affixing of the “Made in” label in the invoice, complies with the conditions set out in the aforementioned art. 24, without providing any information on the preferential origin.

Preferential origin : it enables the reduction or elimination of duties in the trade of goods among the countries who have signed the relevant arrangements that grant a “preferential treatment” when trading specific products which are recognised as “originating” products.

Goods are of preferential origin when they are wholly obtained in the territory of the EU or when:

- Sufficient working has been carried out in the EU or in the territory of the partner/beneficiary country;
- They comply with the list rules which are based upon three fundamental criteria;
- Substantial working procedures outnumber the insufficient working procedures (pay attention to the concept of simple assembly);
- There is a tolerance threshold (the so-called de minimis) that allows to use a percentage of non-originating materials that would not be allowed according to the list rules;
- The cumulation of origin to optimise the supply chain has been applied.

Operations which are always insufficient to obtain the preferential origin:

- Preserving operations to ensure that the products remain in good condition during transport and storage;
- Breaking-up and assembly of packages;
- Washing, cleaning; removal of dust, oxide, oil, paint or other coverings;
- Simple painting and polishing operations;
- Sharpening, simple grinding or simple cutting;
- Sifting, screening, sorting, classifying, grading, matching; (including the making-up of sets of articles);
- Simple packaging operations;
- Affixing or printing marks, labels, logos and other like distinguishing signs on products or their packaging;
- Simple mixing of products, whether or not of different kinds;
– Simple assembly of parts of articles to constitute a complete article or disassembly of products into parts.
Countries with which the EU has stipulated arrangements on preferential origin

The EU grants generalised tariff preferences to developing countries. As it is a unilateral concession, the EU decides:

- What beneficiary countries to include;
- Which products and in what measure;
- The rules of origin to determine the actual benefits;
- How to exclude those products and countries that have become too competitive.
This system consists of three regimes:

- General i.e. reduced duties compared to the duty of the most-favoured nation;
- Duty exemption on many product categories for the countries who are fighting for the achievement of good governance, and for the countries who have ratified the ILO conventions on labour rights;
- “Duty free, quota free” regime for the Least Developed Countries (LDCs) This regime does not include arms and has no time limits;
- NB: Since 1 January 2014, the Generalised Scheme of Preferences (GSP) still has 3 regimes, but with substantial changes. 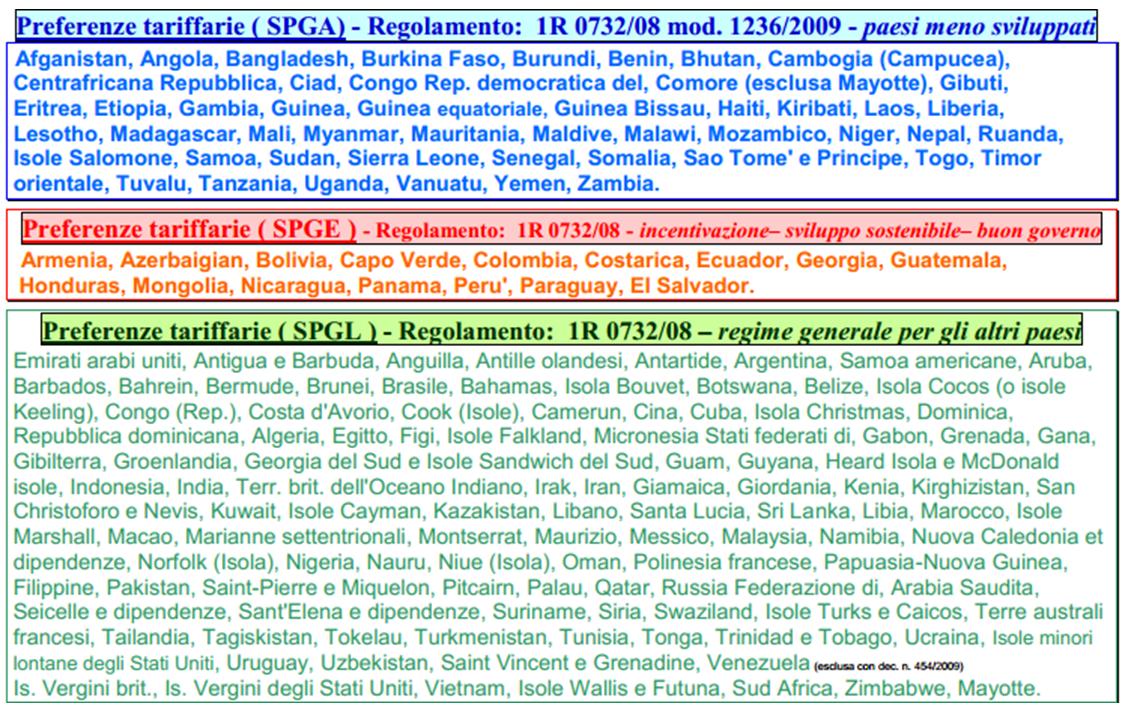 After examining the application, the customs office will arrange an inspection at the registered office of the applicant in order to verify:

- the frequency of the exportations (this requisite is not assessed for exportations to South Korea);
- that the exporter is able to provide sufficient guarantees for the verification the originating status of the products; *
- that the exporter knows the rules of origin and is in a position to offer, at any time, all documents proving origin (suppliers’ declarations, processing documents etc.);
- that the accounts, i.e. the stock records for producers and the management of trade flows for traders, allow the traceability of the operations.

PRESERVATION OF PROOF OF ORIGIN AND SANCTIONS

Suppliers filling out a declaration must retain, for at least three years (five years for the exportations towards South Korea), all documentary evidence certifying the correctness of the issued declaration. The customs authority may arrange controls concerning the origin either when fulfilling importation and/or exportation formalities, or at a later stage (for a period of maximum three years). The customs authority may arrange random controls on the documents giving evidence of the origin of the goods (controls on a sample basis).

In Italy, when importing from non-EU countries, the presentation at the customs of a false Eur 1 or Form A certificate of origin results in the automatic cancellation of duty benefits and the consequent application of “full” import duties, as well as the application of the administrative sanctions provided for by article 303 of the Italian Consolidated Law on Customs, which set outs sanctions equal to 1 to 10 times the value of the evaded duties.
When exporting, the presentation of false Eur 1 certificates, if their falsity has been established subsequent to their lodgement with customs, results in the notification to the Public Prosecutor of the Italian Republic on charges of false declaration of origin. (art. 517 of Italian Criminal Code).

FOR FURTHER INFORMATION ON THE ORIGIN OF GOODS, OR FOR A FREE CONSULTATION, PLEASE POST A QUESTION ON “THE EXPERT ANSWERS” SECTION, OR CONTACT US VIA E-MAIL BY CLICKING ON THE LINK BELOW