Recently, the Schengen information system has been strengthened and there has been talked about an enlargement of the zone without frontiers .

The Schengen Agreement ( 14 July 1985 ) is an agreement signed by Belgium, France, Germany, Luxembourg and Netherlands with the aim of removing controls in the internal frontiers and introducing the freedom of movement for the citizens of the signatory countries, other EU countries and some other countries . Now, the Schengen space has 22 of 28 European countries . These countries are Belgium, Czech Republic, Denmark, Germany, Estonia, Greece, Spain, France, Italy, Latvia, Lithuania, Luxembourg, Hungary, Malta, Netherlands, Austria, Poland, Portugal, Slovene, Slovakia, Finland and Sweden plus other countries which are not part of EU : Island, Liechtenstein, Norway and Switzerland. Bulgaria, Cyprus, Croatia and Romany the agreement is not in force yet and Ireland and UK have not joined the convention, exercising the exclusion clause ( out-put ).

Schengen zone’s rules are : countries have to be responsible for controlling external frontiers of EU ; have to apply the Schengen’s common rules, like the control on the airspace, land and maritime and release visa according to a consistent scheme ; in order to ensure a high level of security in the Schenge area there has to be cooperation between police and frontiers of the various country through the system of Schengen ’s information exchange system . 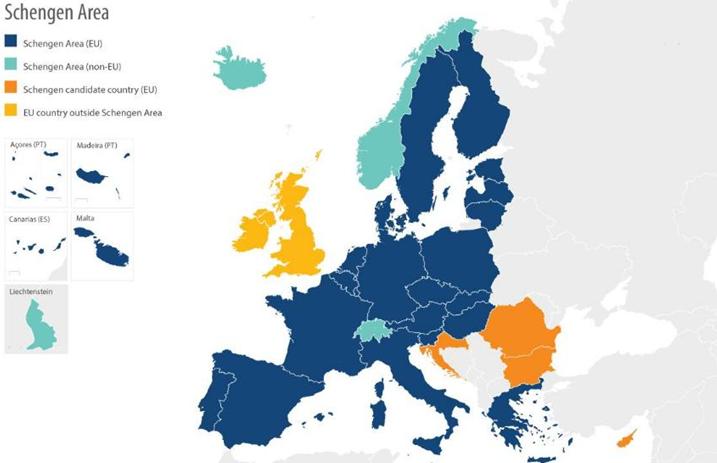 The Schengen space, is one of the most concrete progress of EU, it is a free movement zone where frontiers controls have been abolished for all the travellers, except special circumstances. Every year, 1.25 billions trips are made inside the Schengen area . Moreover, the Schengen membership implies a cooperation with all the members in order to fight organised crime and terrorism .

Wednesday 24th October 2018, new rules have been approved . These rules improve the management of the external borders and they protect the international security of 30 European countries .
The Schengen information system was strengthened in order to give more security to European citizens .
The SIS was established in 1990 after the abolition of frontiers controls in the Schengen space . The current form ( known as “SIS II”) has been adopted in 2006 and it has become operational in 2013 . There will be stronger rules for the data protection, and the supervision of the Data Commissioner .

One of the advantage of European Union is the freedom of movement that means to live, to study, to work and to retire everywhere in the Eu . Recently there has been talked about an enlargement of the Schengen zone : the European Parliament asked many times for the admission of Romany and Bulgaria ; the process of entering of Croatia is going on .

Unfortunately, from 2015 after the migratory crisis and the intensification of terroristic threads, some countries have decided to re – introduce frontiers controls . In some cases, controls have been extended to 30 th April 2018 in France, to 12 th May in Austria, Denmark, Germany, Sweden and Norway . These measures are temporary and special, but after 2 years a normal functioning of the system has not been restored . Frontiers controls obstacle the free movement of people, goods and services in the whole Europe . Controls have a negative impact on the goods transport sector, on tourism and on workers : in fact 1.7 billions European workers cross the frontier to go to work . The maintenance of controls entails administrative costs also related to infrastructures for the public sector . If the Schengen Agreement collapses, the economy will be badly affected .

The Schengen Agreement is an actual advantage for millions European people, and its collapse, could bring not only damages to economy but also to citizens and they will not feel part of the EU and this will lead to a malaise .