THE EURASIAN CUSTOMS UNION AND TRADE WITH RUSSIA

Russia is currently interested in strengthening the Customs Union with Belarus and Kazakhstan, founded in 2010. As Ukraine is increasingly out of the Russian sphere of influence, we are now observing a further political and economic integration among the Union’s member states and a widening of its membership, with the participation of two more countries: Armenia and Kyrgyzstan. The promotion of economic integration among the CIS ( Commonwealth of Independent States ) member states was first conceived in 1994, when these countries began discussing the opportunity of establishing the Eurasian Economic Community.

The acceleration of this process, however, only occurred in November 2009, when Russia, Belarus and Kazakhstan signed an agreement for the establishment of a Customs Union characterized by a common external tariff, a common customs code, the elimination of non-tariff barriers and the distribution of incomes on a proportional basis, that is 88 percent to Russia, 7 percent to Kazakhstan and 5 percent to Belarus. The Eurasian Customs Union came officially into existence on 1 January 2010. Two years later, the three countries established the Eurasian Economic Space, a single market for the free movement of goods, services, capital and labor. In May 2014, the presidents of Russia, Belarus and Kazakhstan signed the treaty on the Eurasian Economic Union, which came into effect on 1 January 2015. Armenia and Kyrgyzstan joined in the same year.

One question about this organization concerns the real possibility of achieving an effective economic union in such a short time, taking into consideration how much time it took the European Union to achieve the same goal. A second problem is related to the Customs Union’s membership. If the Union really wants to become an influential block between Europe and China, as President Putin has affirmed, the increase in the number of member states is a priority. In fact, the Russian economy accounts for almost 90 percent of the Union’s total economic volume, making the participation of Belarus and Kazakhstan almost symbolic. Belarus in fact depends on Russia economically, while Kazakhstan has joined just to have a market for the export of raw materials, rather than for the benefits of a common economic space.

The challenge of the Eurasian Economic Union also concerns the real economic benefits that it should generate for its member states. In 2011, trade between member states increased by more than 34 percent, and by 15 percent in the first semester of 2012. This result, however, seemed to be related to the post-crisis recovery of 2009, when the Russian GDP fell by more than 8 percent. By the second half of 2012, the growth of trade had already declined to 3 percent. According to some observers, such figures indicated the end of the Customs Union’s beneficial effects. Such trend was further confirmed during the first semester of 2013, which saw a -5 percent downturn in trade with Belarus and just a 2 percent increase with Kazakhstan. Finally, another difficulty that the Customs Union has to face concerns the entry of its member states into the WTO and the need for regional regulations to be in line with the multilateral ones.

Because of complex procedures, importing goods in Russia is not easy. The access of western products to Russia is difficult due to the sanctions imposed by western countries following the political tensions with Ukraine. In case of import declaration, the declarer has to be a Russian physical or legal person, except for physical persons importing personal effects. Non-residents can address to a customs broker, that is a person authorized to provide customs services to third parties.

For the import of some kinds of products (such as food commodities, medicines, detergents, cosmetics, perfumes, electric appliances and electronic components), it is necessary to have a certificate ensuring the products compliance to Russian standards as regards consumer protection and safety. The Rosstandart is the responsible body. The products requiring the certificate of compliance can be cleared only if they are accompanied by the Gost-R certificate.

Russia, as well as the European Union, uses the Commodity Description and Coding System, called “Harmonized System”. Commodities are usually subject to three kinds of taxes: the customs duty, the value added tax and, for some products, the excise tax. According to the kind of commodity, it is possible to impose specific, ad valorem and compound duties. The Russian tariff is divided into 4 sections according to countries. European countries benefit from the “most favored nation” clause, they are thus subject to the basic tariff.

The Russian regulatory framework is different from the European one; it requires most products to be accompanied by a specific certificate proving that they meet Russian standards. The Gost is a system launched with the aim of protecting public health and the quality of the products in the Russian market. Such document can be issued by a Russian institution or a foreign one, as long as it is authorized by the Rosstandart. Most products have to be accompanied by this certification in order to be cleared and marketed in Russia.

Trade between Italy and Russia

Italian companies operate in the majority of Russian regions, but most of them are located in Moscow and St. Petersburg. Trade between Italy and Russia is still suffering from the effects of the economic and financial crisis that hit the country in 2014 – 15, as well as from European sanctions. In 2016, trade volume amounted to €17.4 billion, while in 2015, it amounted to over 21 billion. Italian imports have suffered the worst downturn (-46 percent). Fuels, which represent a considerable share of Italian purchases (65 percent), have confirmed the decline of the years before. Moreover, such sector curbed again in 2016, with a decrease of 31.2 percent compared to 2015. However, despite the reduction of the imported quantity, such figures also result from a decrease in the price of hydrocarbons.

Today, Italy is the 6th main exporter to Russia and occupies the same position in imports. At European level, Italy is Russia’s second largest trade partner, preceded only by Germany. Prospects for Italian exports to Russia are improving, however, achieving the before crisis sales level is quite difficult. Sectors were investments are advisable are: electrical energy, gas, steam and air conditioning, pharmaceuticals, health, means of transport and foodstuffs. 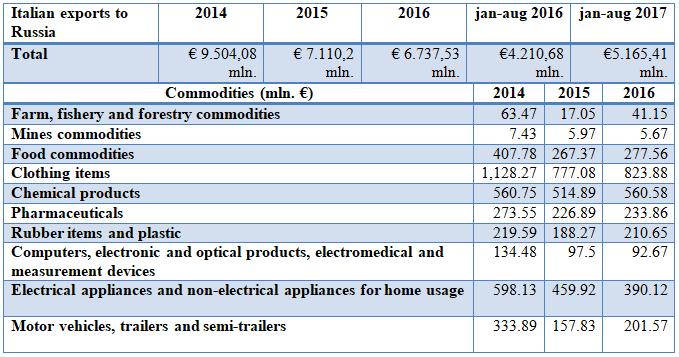