In these months, the “ Belt and Road Initiative ” ( in Italy is also called “ Nuova Via della Seta ) is now being very discussed . The Italian name comes from the golden age of the trades between Asia and Europe. It is a project created by China, in order to expand, improve and develop connection and cooperation in Eurasia . The Belt and Road Initiative is an inclusive project because it wants to help the poor countries in Chinese and European territories, with the development made by investment on export . The countries in this initiative are quite a lot, from China until Spain by land from Southern Asia until the Mediterranean by sea, going through the Suez Canal .
Of course Italy has a very important vantage point because it offers the last Mediterranean port that permits the transit of goods toward Northern Europe . For this initiative, several billions yuan have been allocated by the Chinese government . 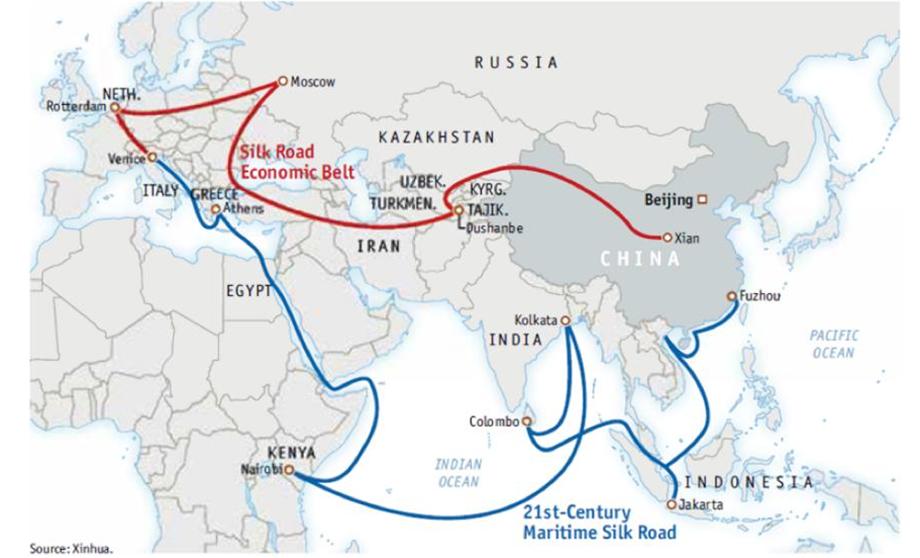 This project aims to create infrastructures that will link all the countries in question, allowing in this way a trade increase and a economic expansion . The initiative was announced in 2013 and it has gradually been taken into account, not only by the Chinese government but also by other countries .

In 2017, in Beijing, an assembly has been held : the “ Belt and Road Forum ”, with the greater international leaders . The Chinese government wants to reconnect over 70 countries with the aim of creating a global economic cooperation focused on peace . China wants more cooperation with more countries, since the purposes are very high and for this it needs enormous investment . Mainly, China is not able to carry all the costs of an infrastructural network of a global size by itself, therefore invites the rest of the world to contribute to the creation of this ambitious plan .

The Chinese government is creating maps for routes which will be done by means of goods transport and there is a clear distinction between the design of the above – ground section and the maritime one . As to “ above – ground section ” we refer to all the road and highway connection, rail and bridges that will be trade routes and meeting – tracts between countries ; talking about the transport by sea, China highlights the importance that some ports will have for this project .

China is about to play once again a very important role for the global economy and with this initiative, it aims to develop and strengthen the welfare of its own population, contributing with the increase the GDP and the other countries’ economy as well . Unfortunately there are obstacles and also disadvantages for other countries, though : the Chinese plan wants to change international balance and for this, the United States will not benefit the advantages of the project . Therefore, America has already started to create a policy against the China ’s plan, and also India is on its side because it fears the hegemonic purposes of Beijing . The European Union focuses on legal issues : EU countries fear that China could dominate infrastructural procurement , stopping the free concurrence, asking Beijing for more transparency .

In the west, the Belt and Road Initiative has been defined in various ways : a new Marshall Plan, a geopolitical strategy with a peace and shared – prosperity purpose but this project is also seen as a colonialist strategy created by China . Moreover, China is designing ‘ Made in China 2025 ’: another plan of renewal that is close to the Belt and Road Initiative . The aim is to transform the Chinese production system into a world factory for cheap products and into a production centre and a high value – added goods sorting .

For Italy, the Belt and Road Initiative could bring enormous advantages . The maritime gates in the project are Trieste – Venice in the Adriatic and Genoa – Savona in the Tyrrhenian Sea . In order to realise the project, there is still a long way to go ; Trieste needs to go on with the enlargement of the container gate and to double it, while Venice is looking for a space for another project created by the Chinese – Italian consortium, but the government did not approved yet . In Genoa, whose port identity has been unified with the Savona one, it will be necessary to create a new dam away from the current one. When all these plans and these works for the infrastructures’ construction will end , the international traffic impact on the Italian economy should make a qualitative leap and the Chinese initiative could bring several job and it could increase the Italian GDP .