SERVICES PROVIDED BY IBS IN UGANDA

IMPORT – EXPORT
- Import and Export of goods between Italy and Uganda;
- Export of goods from Uganda to countries with free movement of goods agreements with Uganda and in the macro area in which Uganda strategically is.

BUSINESS DEVELOPMENT
- Export and Foreign direct investment feasibility studies;
- Customers, suppliers and partners research for direct foreign investments;
- Management of relationships with local and governmental authorities in order to carry on projects to establish ventures or territorial development projects that may employ local people;
- Creation of representation offices and show-rooms to promote the selling of goods or services in Uganda.

ASSISTANCE AND SPECIALIZED CONSULTANCY
- Legal, customs, fiscal and accountability assistance;
- Administrative and bureaucratic procedures for creating in Uganda some ventures, representation offices or operative offices, in order to carry on a foreign direct investment;
- Business planning and business modelling;
- Assistance in obtaining tax breaks, incentives, investment funds for investors interested in an entrepreneurial project in Uganda;
- Assistance and consultancy in banking and financial operations; 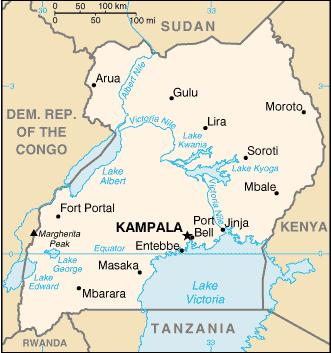 There are good growth forecasts in the following sectors:

- construction industry, also thanks to the conspicuous private contributions and to international donors;
- oil industry and exploration; the start of oil production is expected for 2016;
- mining and extractive industries, where there is good potential, still unexplored;
- renewable energy sector, in particular photovoltaic and hydroelectric energy;
- agro-processing industry, production and export towards foreign countries, within regional and international agreements about cooperation;
- services, in particular telecommunication and transports.

UGANDA, WHY CHOOSING IT FOR FOREIGN BUSINESS

STABLE ECONOMY : Uganda launched a programme of economic reforms in the ‘80s. It has a relevant macroeconomic stability, making it the perfect place to invest foreign value, thanks to the many liberalized economic activities and to reforms in agriculture, fishing, manufacturing, energy and tourism.

STRATEGIC POSITION AND ACCESS TO REGIONAL AND INTERNATIONAL MARKETS : Uganda enjoys a strategic geographic position, which allows easy access both to the internal market and to various regional markets, the “East African Community”: this one comprehends around 140 million consumers, the ideal connection to 26 countries.

UGANDA’S GEOGRAPHIC POSITION: Uganda is a landlocked country in East Africa, and its capital is Kampala. It is bordered to the north by South Sudan, to the east by Kenya, to the south by Rwanda and Tanzania and to the west by the Democratic Republic of the Congo. Its climate is influenced by its large lake basins, namely Lake Victoria and Lake Albert, which are linked by the Nile river. Its abundance in water makes Uganda one of the most fertile countries in Africa, and it assures a constant production and surplus of foodstuff. The country is mainly flat; however, the average elevation is about 1.000 meters, with a few mountains located on the border with Rwanda. Elevation mitigates the tropical climate, therefore temperatures from December to January may reach 29 degrees at most. The rainy season, from April to October, can continue until November in the south of the country.

MINERAL RESOURCES AND MINING ACTIVITIES : Uganda has vast ore deposits and natural resources. Only 40% of the total oil resources has been explored until now; nonetheless, there are 3,5 billion barrels of oil only in the Lake Albert basin. Moreover, there are fertile agricultural activities thanks to favourable climatic conditions: in Uganda there is fertile soil, lakes, rivers and it rains often enough.

RELATIONSHIPS BETWEEN ITALY AND UGANDA AND BUSINESS DEVELOPMENT : Relaunching of bipartisan relationships between Italy and Uganda, following mutual visits of the delegations of the respective Ministers in charge. Nowadays Uganda has interesting opportunities for expansion for Italian firms interested in investing in Uganda thanks to its increasing regional role.

Last general elections in Uganda have strengthen the President’s role and its party, National Resistance Movement. The opposition keeps on being fragmented, so it is very unlikely that there will be a change shortly. There still are some tensions in Buganda, an internal region with a large degree of autonomy, which has a constitutional monarchy and a local parliament of its own, and in the kingdom of Bunyoro, where there are huge oil resources.

Although the country had rather inadequate energy infrastructures and road connections, it has managed to maintain a good growth index in real economy, even in the last years of general crisis. The National Development Plan 2010 – 2015 aimed mainly to the development of infrastructures. Although the inflationary pressure is decreasing, it may vary, and that may have consequences on the prices of foodstuff and crude oil, as well as on the stability of the exchange rate. A potential resource for the development of Uganda in the mid-long term is the probable discovery of further oilfields near Lake Albert.

There are 25 commercial banks and several micro-finance institutions operating under Bank of Uganda’s supervision. The banking sector is expanding and bank assets represents 29% if the GDP. There are 16 foreign credit institutions and the credit access, both formal and informal, is still low (38%).

The operating context may suffer from some critical situations, especially in bureaucracy and in judicial context; nonetheless, the government takes its responsibility towards foreign investors. It offers substantial tax incentives, thus avoiding controls or restrictions linked to payment transactions or transfers of foreign capitals. There still is a risk of terroristic attacks, linked to some instability in the country, which makes the national security relatively vulnerable.

Embassy of Italy in Kampala
Government of Uganda