BREXIT: ONE YEAR AFTER

WHAT IS THE SITUATION IN THE UK AFTER THE REFERENDUM ?

On June 23, 2016, a slight majority of the British electorate ( 51.9 percent ) – going against the predictions of pollsters and politicians – voted to leave the European Union. As soon as the referendum result emerged, the pound started wilting. David Cameron resigned and his colleague Theresa May became prime minister. While panic was spreading, the Bank of England was forced to take action in order to stabilize the situation with promises of liquidity for the banking system. As things stand, the UK will leave the EU on March 29, 2019. So, one year after Brexit, what has the effect actually been, up to now, on the economy ?

During the night of the decision, the pound suffered its biggest one-day downturn against the dollar, hitting the lowest in 31 years. Today, one pound is the equivalent of $ 1.33. However, exporters are currently benefiting from a weaker pound and no change to tariffs to the EU. 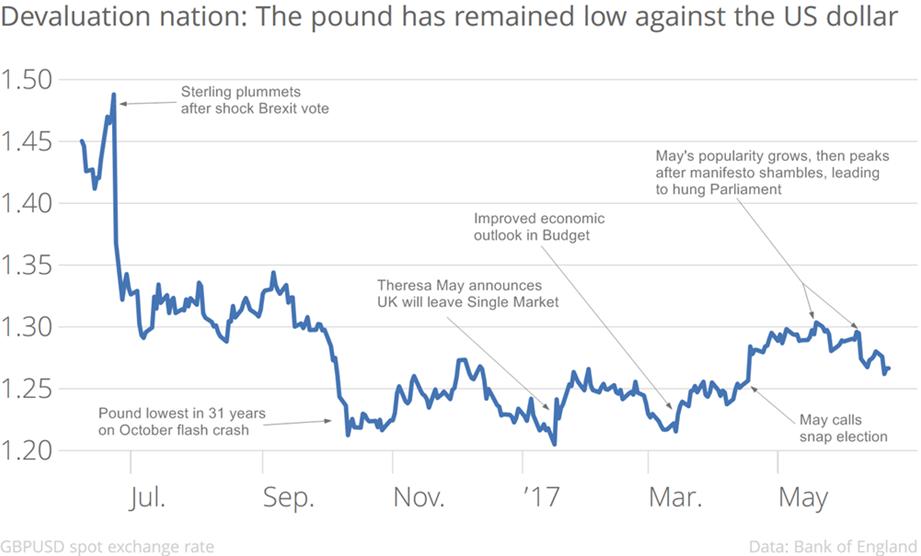 The deal that the British government will manage to make in the near future may affect the country’s economy. The devaluation is a benefit for British exporters, but this implies an increase in the cost of imports, which is the reason inflation is now rising faster than workers’ salaries, leading to a reduction of living standards. Business investment has also suffered since the referendum, as firms are uncertain about the UK ’s future trade agreements with the EU and the threat of tariffs and customs barriers.

British consumers proved unexpectedly resilient after the referendum, such resilience allowed the GDP to grow, avoiding a recession. The economy actually grew by 0.7 percent in the last quarter of 2017. Yet, since the turn of the year, there have been distinct signs of shoppers discouragement as inflation is increasing, reaching 2.9 percent in May. Retail sales, a very important component of consumption, decreased by 1.4 percent in the first quarter of 2017.

Richard Gnodde, the chief executive of Goldman Sachs European branch, said that the American bank, which currently employs around 6,000 people in London, would relocate hundreds of staff out of the city even before any deal is made, as part of his contingency plan. Others have already taken more drastic actions. Transferwise, one of the biggest European fintech firms, said that it will move its European headquarters from London to continental Europe by March 2019 with the aim of keeping access to the single market.

The car industry is often highly exposed, because of its integrated EU supply chains and its dependence on foreign workers, therefore it is considered one of the sectors most vulnerable to an exit from the single market. Britain moving to a World Trade Organization tariffs regime could lead to the introduction of a 10 percent tariff on finished vehicles. In March, a study carried out by PA Consulting demonstrated that if manufacturers pass these costs directly on to customers – and taking into consideration all the steps of production – the price of a new vehicle could soar by £ 2,372 per car.

Like the auto industry, the construction and manufacturing sectors stand to lose a lot, especially if Brexit limits the free movement of labour. In a report published in March, the Royal Institution of Chartered Surveyors stated that almost 200,000 jobs in these sectors could be lost if Britain is denied access to the European single market. The British Chambers of Commerce and the Confederation of British Industry have starkly warned about the potential effect of Brexit on certain industries. Around 117,000 EU citizens left the UK in 2016, an increase of 31,000 compared to 2015 and the highest estimate ever observed since 2009.

More than half of the food eaten in the UK is imported, which means that the post-Brexit devaluation of the pound has been squeezing the food and beverage industries. Costs have been increasing for suppliers and that is being passed on to consumers, while supermarkets aim to keep prices as low as possible to protect profits.

What people in the UK think about Brexit

Joe Twyman from pollsters YouGov says that in general, people haven’t changed their mind from how they voted last year. A curious fact is that 26 % of the population that voted Remain believe the UK should go ahead with Brexit, because the majority voted favorably, he affirms. However, he adds that the political situation is “very fluid”, and depending on how the negotiations go, such opinions may easily change.

The negotiations between the UK and the EU

Negotiations between the UK and Europe have already got underway and will proceed for most of the next decade. Britain may achieve a “ partially attached ” status, like Norway and Switzerland, or negotiate a unique agreement, but few policies are likely to change, and those that do will favor Europe, not the UK. These predictions stem from an analysis of two important factors that, according to political scientists, affect global economic and political issues : interdependence and influence.

The European Union is built around a single market with shared regulations. Other policies, such as the Euro, collective defense, the free movement of goods, services, capital and labour within the Schengen zone, homeland security and external immigration are optional. British leaders are tempted to select policies, keeping only those they agree with. The UK has proposed to take back the control of fisheries, agriculture, foreign trade and especially immigration policies, where it feels disadvantaged. Europe, naturally, will not let Britain treat such policies as optional. So, the first reason Brexit is unlikely to generate further political changes is that, although the UK has refused most EU policies for a long time, it is deeply connected to Europe on those it adopted. Britain needs the European Union’s liberal rules because it benefits from them: It needs European countries to ensure access for its exporters, service providers and educated people. Britain is unlikely to extract many concessions from a far larger Europe on which it is asymmetrically dependent. Almost half of British exports go to Europe : They account for 13 percent of British GDP, while European exports to Britain only account for 4 percent of European GDP . Secondly, the rapid ratification of trade agreements with non-European countries to strengthen the British bargaining power, suggested by some conservatives, would be rather ineffective, as these trade agreements generally take a decade or more to be negotiated, and Britain alone is so weak that it is unlikely to wield more influence on the United States or China than on the European Union . 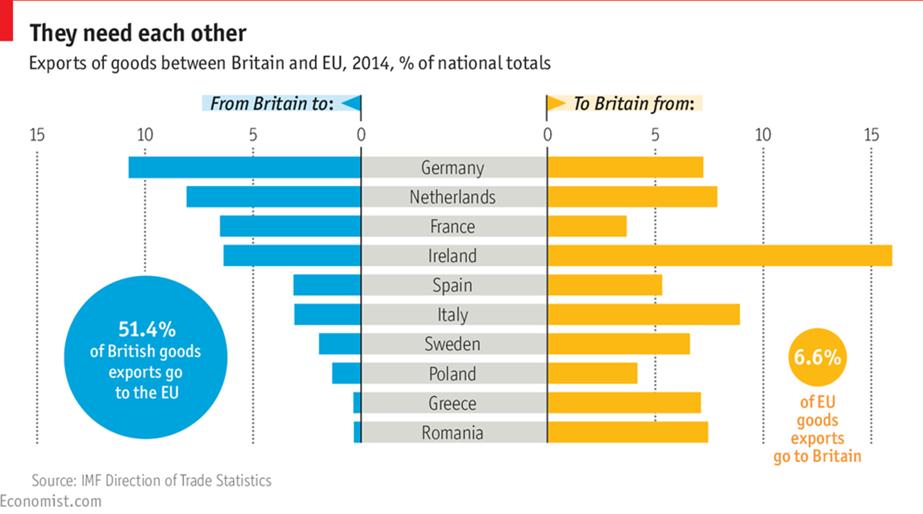 Britain is in a difficult negotiating position: Its economy and security are too deeply related with Europe and its global bargaining power too limited. In theory, Britain could carry out its threat to leave the European Union, but in practice, more will remain the same than will change.

Sources ” BREXIT: ONE YEAR AFTER “: