The following country profile underlines Brazil traditional aspects and it has been realised thanks to International Monetary Fund information.

FILL THE GAP AND FOSTER INFRASTRUCTURES INVESTMENTS IN BRAZIL

Subsidies for Brazil infrastructures are lower than international standards, as well as the low quality of productivity, market efficiency and competitiveness. In order to increase the economic strength and boost growth, it is necessary to increase investments in infrastructures.

DEVELOP AN ECONOMIC STRATEGY TO INCREASE INVESTMENTS IN INFRASTRUCTURES REQUIRES A CONNECTION BETWEEN INFRASTRUCTURE PROVISIONS AND GROWTH, IN ORDER TO DEFINE THE INFRASTRUTURAL GAP AND FINDING THE MOST SUITABLE MEAN TO HAVE FUNDS

The zones in which Brazil competitiveness has decreased are, (but there are also other zones) education, innovation, governance and judiciary. Inadequate infrastructures do not allow to improve the insufficient productivity, stagnant exports, insufficient integration in the domestic market and the weak growth potential. The market segmentation due to the difference between relative prices can have important social and macroeconomic involvements. The incomes inequality can increase according to the market segmentation, for example for rural zones producers with a low income which are negatively influenced by difficulties in access to mass consumption markets. Several years of insufficient investments in infrastructures have contributed to decrease the potential growth.

How much is Brazil integrated?

International data, using empirical approaches and considering CPI data, have shown few periods of price convergence halving in other countries. For China, the average convergence period between 1993 and 2003 (Li and Hung, 2006) was 2.4 months, for Canada between 1978 and 1994 was 5 months (Fan and Wei, 2006). Results for both countries show that more than 90% of shocking prices will disappear within 18 months, very faster than Brazil. 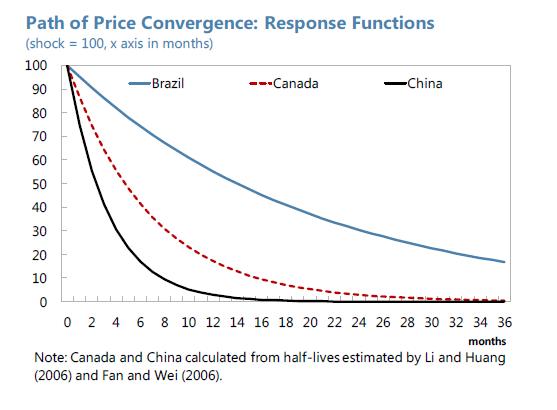 Brazil ranked 120th on 144 countries examined by the World Economic Forum in 2014 for the overall quality of infrastructures. It had very low quality level in the transport sector and the third sector was worse than those of other countries examined. Brazil results were low in the last 10 years and they have worsen in the last 5 years. However in order to make a better comparison we chose some Brazil infrastructure benchmark and those of its main competitors for the export. 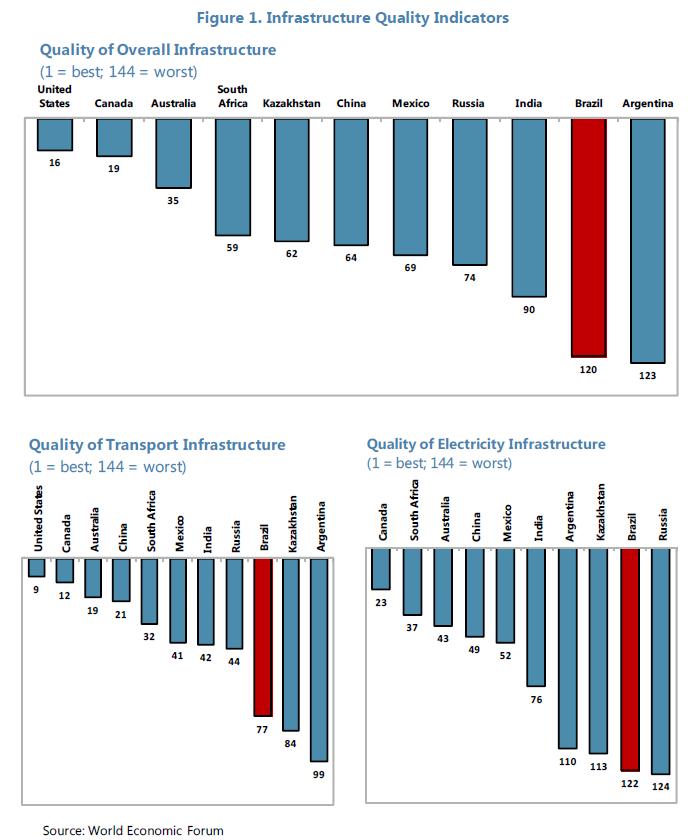 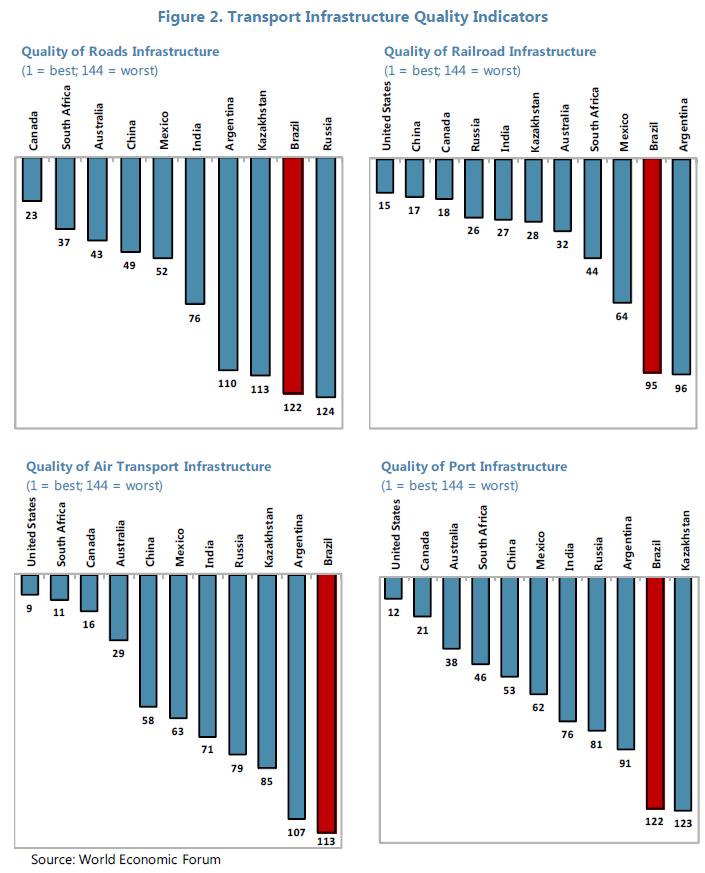 Brazil levels of physical capital adequacy in every infrastructure of transport sector (roads, ports, railways and airplanes) are considerably lower than those of its main export competitors. Only electricity and telecommunications sectors have a better quality than some of its competitors. In this sectors Brazil has invested in the same way even more efficiently in the last years through a greater participation in the private sector. Yet, according to the Enterprise Survey 2010 by the World Bank electricity have been one of the main problems for 46% of Brazil companies (38% LAC) and 28% believes that transports are an important problem (23% LAC). 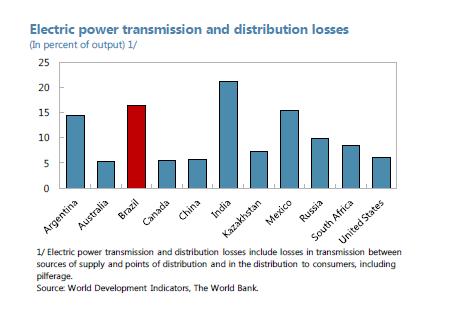 Brazil competitors rely more on railways for goods transport which is more suitable for greater goods amount and for prime materials with a low additional value. In Brazil, 60% of farming products are transported on roads and highways while the majority of iron is transported on railways (Credit Suisse 2013). Transport system is a problem for Brazil exports and competitiveness because of the quality of its roads. 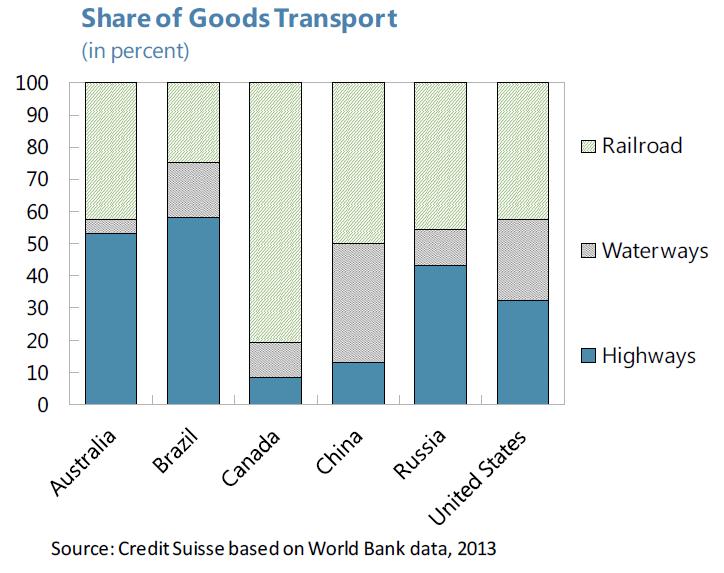 Airports and ports are limited and they have to be improved

In 2013 only Santos Port (Sao Paulo) was in the top 100 world’s ports at the 42 nd position, thanks to a 6.2% increase of throughput in 2012 (International Containerisation). Anecdotal evidence of problems in Brazil ports can easily be found, for example: according to Credit Suisse “There are 10 miles queue of lorries outside ports waiting to unload crops and 200 ships waiting to load goods”.
Yet, part of the increasing infrastructure gap is probably due to an inadequate maintenance and to an increased use, but the main cause is the extended period of inadequate investments compared with other countries.

In the period 2005-2010 the overall score of Brazil infrastructure have been lower than an average made by selecting countries according to their GDP per capita (PPP 2.005 $).
Among Brazil export competitors, only Argentina average was higher but the final result hides differences in every sector.
Brazil electricity supply and infrastructures have a high result. On the contrary, roads, railways, airport and ports quality is below the average. Roads and airports have the biggest problems. 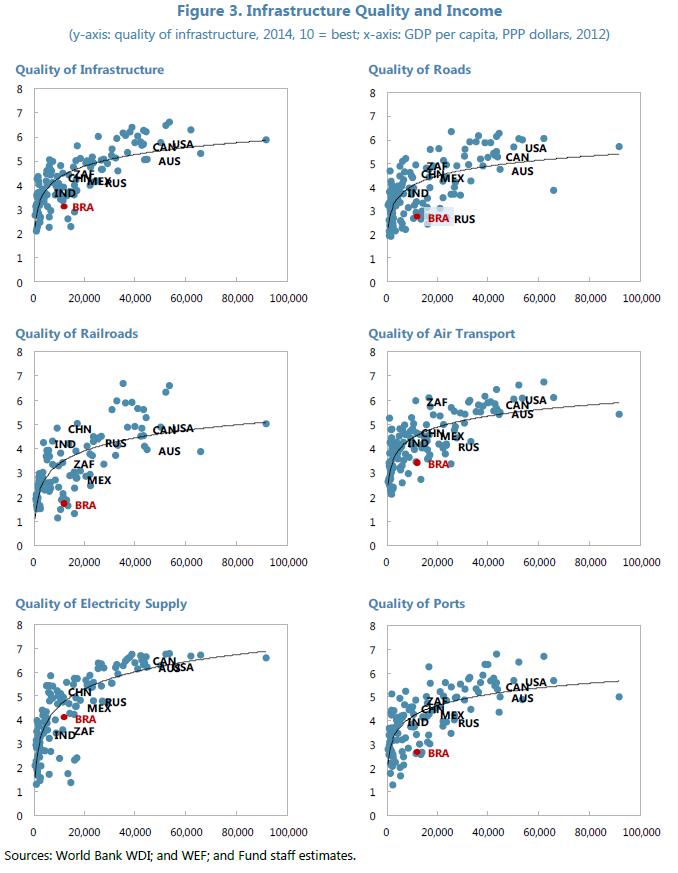 In the early eighties, investments in infrastructures in Brazil have considerably decreased from an average of 5.2% of the GDP to 2% in the last two decades and slightly increased of 2% in 2013.
goods and data of standard infrastructure investments, for a comparison are not available, many data source confirm that for two decades investments in infrastructures haven’t been as adequate as those of Latin America and new emerging countries Chile, China and India ( Calderon and Serven, 2010; Frieschtak, 2013). Moreover there are many difference in investments in each sector. In particular, electricity and telecommunications sectors represent the biggest part of Brazil investments, especially because of private sector participation in the framework of granting concessions. On the contrary, Chile has invested more in roads, water distribution and supply and hygiene services. 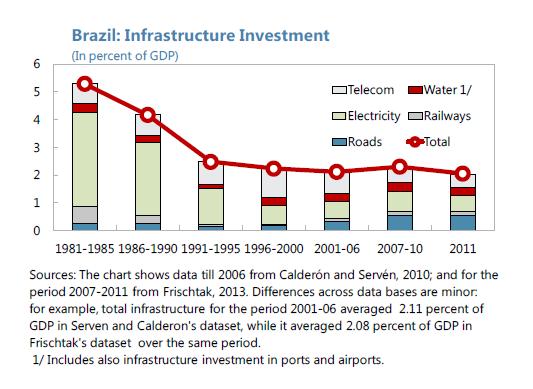 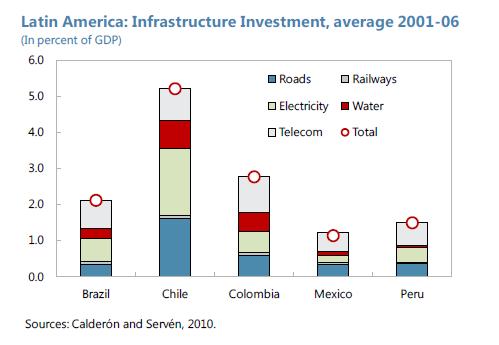 1988 Constitution has decreased the federal funds pools available for capital expenditure, because it has replaced sector specific federal taxes for energy, transport, telecommunications with non specific national-level taxes. It has also increased transfer to subnational governments, and it has used money for current public expenditures.
From 1999 the efforts for public accounts recovery has decreased the available fiscal space for public investments due to balance rigidity and current obligatory public expenditure.
As a consequence, since that period public expenditures allocated for infrastructure investments have always been inadequate, despite of initiatives in order to give priority to infrastructure investments. such as the Programa de Aceleração do Crescimento (PAC) started in 2007 by the federal government in order to boost the economy growth.
Currently almost 75% of the overall investments for public administrations is made at subnational level.

Meanwhile, private sector investments have filled the space left by the public sector

Grants can bring competences and efficiency in private sector and also bypass some of the public investments challenges (such as contractor obstacles) boosting the investment process.
At the end of ninenties in Brazil there have started a first period of grants. Through privatizations, private sector become the main operator in energy, transports, railways and telecommunications sectors.
There have been grants for 5.000 km of federal roads. It is important to underline that this investments through grants in telecommunications and electricity have contributed to delete the infrastructure lacks and have improved Brazil rank in this areas, as mentioned before.

the current period of grants has started some years ago and it is focused on projects for infrastructure sectors in a critical situation, such as roads, ports and airports

During the period 2011-2014 there have been auctions for grants in the transport and energy sectors, with a total investment of around 183.4 billion R$, divided between airports (R$ 35,8 billion), ports (R$ 8,4 billion), roads (R$ 29.2 billion), urban transport (R$ 6,9 billion), energy production and supply (R$ 96,7 billion) and telecommunications (R $ 6,4 billion). Federal government plans include transport system projects ( roads, railways and ports) energy production and supply, urban transports and telecommunications with a total investment of R$ 109 billion (Secretaria de Acompanhamento Econômico, 2015). The grant period is between 20 to 35 years and the majority of infrastructure investments will take place in the first five years. It is foreseen that past and future grants will be 3 / 4% of the GDP of infrastructure investments per year in the period 2011-2017.
Offer delays and changes in contracts could decrease investments in the future. The infrastructure grant program could be affected by Petrobras corruption as well as many of the main construction companies. These companies could have a decreased accession to financing.

In the last years, Brazil economy situation and its competitiveness have suffered from problems with the complex fiscal system, administration obstacles, judicial and bureaucracy inefficiencies, the inadequate regulatory framework, called “custo Brasil”.
Infrastructure bottlenecks are not considered part of this “soft” burden, because of the capacity of attract companies, which is one of the biggest restrictions to the increase of the potential growth.
Infrastructures are not suitable for the current revenue levels, to support regional integration and to make Brazil more competitive than its competitors for the main export products.